Double win for Gabriel, Apprentice of the Year!

We were delighted in 2017 that Gabriel Williams won not one, but two awards Apprentice of the Year Awards, at the FMB Wales Awards and Yprentis Awards!

Gabriel was a Quantity Surveying apprentice with Y Prentis from December 2015 until August 2017. During that time, he worked with Encon Construction on a number of high-profile developments and won some prestigious awards for his work as an apprentice.

At the age of 16, Gabriel left school and enrolled into a full-time quantity surveying course at Coleg y Cymoedd’s Nantgarw Campus. He had always thought about an apprenticeship but was unsure about how to go about securing one. A few months into his course, Y Prentis got in touch with the college to seek an ideal candidate for a Quantity Surveying apprenticeship.

Gabriel said: “When the college said that Y Prentis were looking for a Quantity Surveying apprentice, I did some research into who they were and instantly felt that this would be an ideal opportunity for me. I applied and got shortlisted for an interview with Y Prentis. I was then invited back for a second interview with Encon construction, and shortly after I was offered the position.”

“This position with Encon was my first proper job, so I was really nervous at first. However, the team at Encon were really welcoming and Y Prentis were supportive in helping me prepare for what to expect.”

Gabriel is now directly employed by Encon as a Trainee Quantity Surveyor and is studying a part-time Quantity Surveying and Commercial Management course with the University of South Wales. He said: “About four months before I finished my apprenticeship, I had a meeting with the directors at Encon. They asked me what my plans were for when I finished my apprenticeship and what I was interested in doing. They said they were keen for me to stay on and would pay for me to go to university, so I could gain even more qualifications. I always wanted to go to university to do some further studying as I know that gaining more qualifications would help me progress in my career as a Quantity Surveyor, so it was great that they offered to fully fund the course for me.

“The course is very focused on what I do on a day-to-day basis. Having done an apprenticeship, I often feel that I’m at an advantage having already had some hands-on experience of some of the topics taught.”

Richard Miles, Construction Director at Encon Construction, said: “Gabriel sums up the benefits of the apprenticeship scheme, not only from an apprentice perspective in gaining practical skills and experience but also for companies such as Encon Construction who have benefited from his enthusiasm, dedication and work ethic. Gabriel was our first Quantity Surveying apprentice and as a result of the very positive experience we have had, we are in the process of currently recruiting further apprentices into a range of disciplines via Y Prentis.”

We asked Gabriel what he’d say to somebody interested in applying for an apprenticeship. He said: “Go for it! If you can get an apprenticeship you get the benefit of learning in both a classroom environment and out on site – and you’re getting paid for it too! You learn from people who have worked in the industry before. My journey started with Y Prentis, but the opportunities it has led to have been great. I’ve learnt a lot through college, university and by being with Encon and it’s put me in good stead for the rest of my career.” 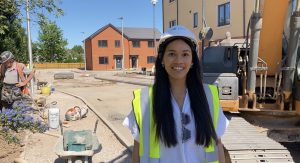 Read More »
Back to top